An Evening with Alison Weir 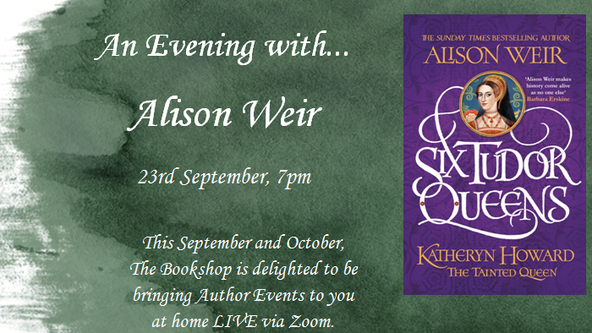 We are delighted to announce that acclaimed novelist and historian, Alison Weir will be returning to The Bookshop on Wednesday 23rd September, in our series of online virtual events! She will be talking about her newest novel, 'Katheryn Howard, The Tainted Queen: Six Tudor Queens 5'.

A NAIVE YOUNG WOMAN AT THE MERCY OF HER AMBITIOUS FAMILY.
At just nineteen, Katheryn Howard is quick to trust and fall in love.
She comes to court. She sings, she dances. She captures the heart of the King.
Henry declares she is his rose without a thorn. But Katheryn has a past of which he knows nothing. It comes back increasingly to haunt her. For those who share her secrets are waiting in the shadows, whispering words of love... and blackmail.

KATHERYN HOWARD
THE FIFTH OF HENRY'S QUEENS.
HER STORY.