An Evening with Carolyn Kirby 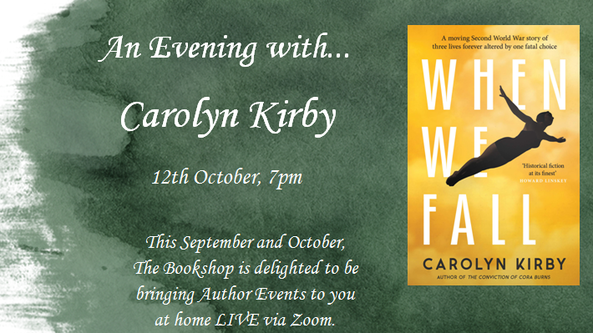 We are thrilled to announce an evening with Carolyn Kirby on her new novel, 'When We Fall', as part of our series of online events this September and October, bringing Author Events to you at home LIVE via Zoom.

England, 1943. Lost in fog, pilot Vee Katchatourian is forced to make an emergency landing where she meets enigmatic RAF airman Stefan Bergel, and then can't get him out of her mind.

In occupied Poland, Ewa Hartman hosts German officers in her father's guest house, while secretly gathering intelligence for the Polish resistance. Mourning her lover, Stefan, who was captured by the Soviets at the start of the war, Ewa is shocked to him on the street one day.

Haunted by a terrible choice he made in captivity, Stefan asks Vee and Ewa to help him expose one of the darkest secrets of the war. But it is not clear where everyone's loyalties lie until they are tested...

Published to coincide with the 75th anniversary of VE Day and based on WWII war atrocity the Katyn massacre, When We Fall is a moving story of three lives forever altered by one fatal choice.