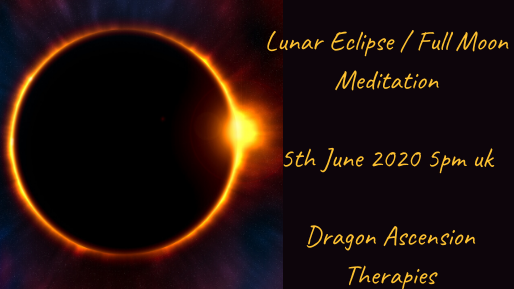 We have a fabulous full moon / lunar eclipse combo on the 5th June . Which opens up an eclipse window and many other things.

Something that we came across on the Online Retreat was that many of us have muffled or turned off our own inner voice. And it was useful to find ways to mute the rest and bring that forwards instead. So this is what I wanted to bring forwards for more people as it was empowering stuff.

Now given this will be done on the eclipse window opening I understand what my team are showing me. This infinite possibility energy is potent stuff. So ideal for really looking at all the voices we carry with us - that aren't perhaps ours.

And consciously tuning them out , or in some cases removing them completely. To allow our own TRUE inner voice to step in. To be heard, to be acknowledged. And to assist you in being the autonomous being you are.

"Ok so what else is going on then?"

Where to even start with this one?

We have full moon and lunar eclipse on the 5th.
Followed swiftly on the 18th June with the next Mercury retrograde - don't panic that's a good thing!
We then move into Summer/Winter Solstice on the 20th depending where in the world you are.
The 21st June sees New Moon and a solar eclipse.
July 4th we have Full Moon
And finally 5th July we have a lunar eclipse closing the eclipse window.
So as you can see a few things going on.

Once you have booked a space you will receive email confirmation with the Zoom link and password - please keep this is a safe place as it will be needed.

Make sure you are comfortable when you connect in as you may go fairly deep into meditation. If you like to work with candles, incense etc then please do so.

A note book and pen is advisable should you have any "ah ha" moments or the like.

Please note that I cannot control what comes forwards for individuals so please ensure you are comfortable to do your work as it surfaces.